“eldest” [n̓úlá eldest (in family) + ǧṃ ahead, foremost + i (refers to person or thing named)]

The month corresponding to our January is associated not with a newborn, but with the first born in a family. Hence it is called n̓úláǧṃi, or the “eldest”. 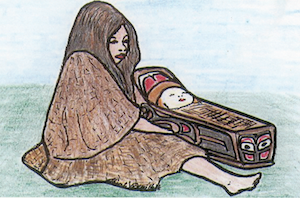 
When the sky gets creamy in colour, the herring are going to start spawning soon. The name for this month could mean “milky sun” too, referring to atmospheric conditions characteristic of this time. The moon, or sun, appears through a milky veil of clouds or water vapour in the sky. Herring is associated with this time of year. Two other names were given for February. Qplá refers to the first quarter of the moon, when the moon is said to be loaded with herring and is trying to tip over. Just before it tips over the weather becomes very windy – múlíqvla or “bubbling up”. This name refers to the wind, and to the sea’s getting dirty. 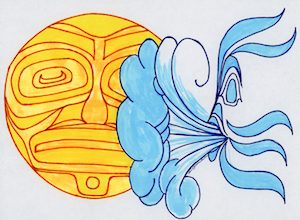 
People watch for the moon to go from a half moon to a tipped crescent moon. This is a sign that the herring are spawning all over. 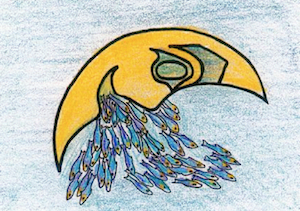 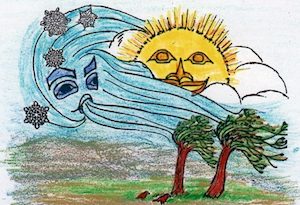 This is the beginning of the good or pleasant season, when it first gets to be like summer (hi̓ṇ́x̌). 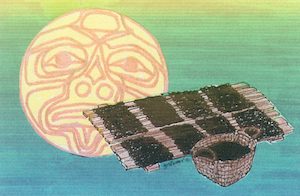 The first salmon start to show up for the year and it is time to fish for sockeye. 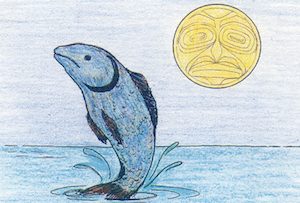 Berries begin to be ripe. Salmonberries are ripe in great profusion. 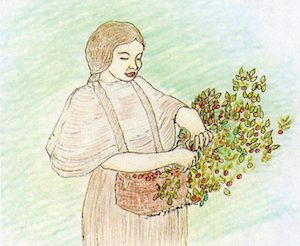 The dog salmon return to their streams to spawn. 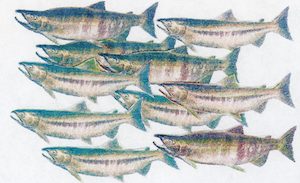 Bark is stuck fast to the trees, and the growing season is drawing to a close. (By contrast in the early spring, when the sap begins to rise, bark is easily peeled from the trees). Sísx̌p̓igaút is also the fish processing season. 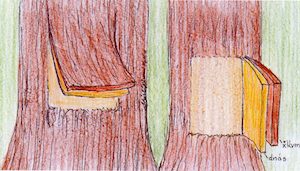 “finished (the planting of fish eggs and seeds)” [ǧvál finished + ís on beach, in world]

The fish (salmon) are finished spawning. 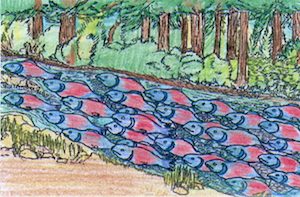 There is lots of rain. It makes the rivers big and washes away all the fish remains. 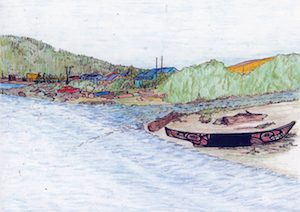 This is also translated nowadays as the “giving season”. 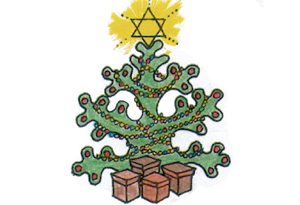 In 1835, William Fraser Tolmie, a physician and fur trader for the Hudson’s Bay Company at Fort McLoughlin in McLoughlin Bay (our Old Town) recorded the following: “names of the moons – Haeeltzuk”

Source: Physician and Fur Trader, Mitchell Press Ltd. Vancouver: 1963, p. 318.
*In the Haisla language, which is closely related to Heiltsuk, n̓ulaǧṃi means “oldest brother or sister”, or “porcupine” (the first animal created, according to legend).

The anthropologist Franz Boas visited Bella Bella in 1923. He recorded the following names for the months:


Acknowledgements
Illustrations by Shirl Hall © Shirl Y̓x̌vxmi Hall the Board of the Bella Bella Community School Society, and were created for the Heiltsuk Language Program of the BBCS. Permission to duplicate these illustrations on the https://heiltsuk.arts.ubc.ca/ website was granted February 6, 2019.

Names for the Months in 1978
Following the phases of the moon is one of the oldest methods of keeping track of the progression of time throughout the year. The names assigned to the months by the Heiltsuk reflect their seasonal activities and seasonal weather and meteorological conditions. For the Heiltsuk these names have changed slightly over time reflecting modifications in lifestyles and seasonal activities. The most recent set of names, presented here, were prepared by the Yílístis Society in 1978, with further explanation by Beatrice Brown, Hannah Hall, Evelyn Windsor, and Clarence Martin. See HCEC Híɫzaqvḷas Húsḷá, Keeping Track of the Year in Heiltsuk, Information Bulletin Vol.1, No.1. (March 1989)﻿